In 2013, with the gradual exertion of policy effects such as overcapacity, promotion of mergers and acquisitions, promotion of independent innovation, technological transformation and upgrading, and promotion of industrial transfer, the industrial structure was continuously optimized, and the quality and efficiency of growth were gradually improved. In the second half of the year, the industrial recovery trend was obvious. From August to October, it returned to the growth range of more than 10%. Among them, the manufacturing industry increased by 11.4% in October, 1.1 percentage points more than the industry. From January to September, the profits of industrial enterprises above designated size reached 40,425.28 billion yuan, a year-on-year increase of 13.5%, which reversed the unfavorable situation of the decline in the profit growth of industrial enterprises in the same period of 2012. However, there are also problems such as a slowdown in manufacturing investment growth and a situation of overcapacity. It is expected that in 2014, driven by a series of reforms and deployments in the economic field, industrial restructuring will be further accelerated, laying the foundation for the basic realization of industrialization by 2020.

Basic judgment on the situation in 2014

The problem of overcapacity in some industrial sectors in China since 2012 has seriously hindered the steady and rapid development of the industrial economy. In accordance with the central government's "four batches" of governance requirements, various departments have adopted measures such as controlling increments, promoting backward production capacity withdrawal, and expanding domestic demand to resolve overcapacity contradictions. These measures have also effectively promoted the adjustment of industrial structure. In 2014, driven by policy measures such as controlling increments, promoting backward production capacity, expanding domestic demand, and mergers and acquisitions, not only the overcapacity conflict is expected to be initially resolved in 2014, but the pace of structural adjustment in key areas will also resolve overcapacity. The further implementation of policy measures has been accelerating.

In 2013, Chinaâ€™s efforts to promote mergers and acquisitions in enterprises have increased. On January 22, 2013, the Ministry of Industry and Information Technology and other 12 ministries and commissions jointly issued the â€œGuiding Opinions on Accelerating the Merger and Reorganization of Key Industry Enterprisesâ€ to accelerate the promotion of the merger and reorganization of nine key industries such as steel and cement. As the "Guidelines for Mergers and Reorganizations" require key industries such as steel, cement, automobiles, and ships to complete the established merger and reorganization targets by the end of 2015. At present, there is still a certain gap between the industrial concentration of these industries, the number and size of large enterprise groups, and the requirements of the â€œGuiding Opinions on Mergers and Reorganizationsâ€. In order to ensure the smooth completion of these goals, in 2014, all localities will continue to increase the promotion of mergers and acquisitions, and mergers and acquisitions in key areas will continue to be active.

(1) The return on investment in manufacturing industry is low, and the tendency of capital to break away from reality

As the rising house prices are difficult to fundamentally reverse in 2014, and the financial sector will gradually increase the opening of private capital, the cost of production factors will still have greater pressure to increase, leading to the stagnation of private capital in 2014. The momentum is still strong. Private investment is the most active part of promoting China's economic development and accelerating industrial restructuring, especially in technological transformation, mergers and acquisitions. Insufficient private investment, manufacturing companies will be more difficult to finance. Coupled with the current downward pressure on the economy, the real economic environment is not optimistic, and manufacturing companies that lack financial support are reluctant to invest and dare to invest. This will slow down the process of technological transformation and mergers and acquisitions, thus affecting the progress of industrial restructuring.

(4) The living environment of SMEs has not improved significantly

In 2013, under the promotion of a series of national policies to promote the development of small and medium-sized enterprises, SMEs ushered in a rare opportunity for development. However, due to the downward pressure on the economy, rising labor and production factor costs, lower product export prices, fewer orders, and other aspects, as well as loan financing, financial support, industry access, fair use of elements, and the role of investment entities, there are still some systems. Sexual barriers, the living environment of SMEs did not improve significantly. In particular, in 2013, the bank experienced a â€œmoney shortageâ€, which led to a significant increase in the proportion of credit invested by banks in SMEs.

Countermeasures should be taken

First, gradually break the administrative monopoly of telecommunications, aviation, electric power, petroleum, railway and other industries, support the entry of private capital, and promote the diversification of investment entities. The second is to effectively implement the â€œnew and old 36â€ of the non-public economy and improve the financing environment for private enterprises, especially the private enterprise financing environment. The third is to accelerate the reform of the investment system, effectively cancel and decentralize the approval power of private capital to enter the manufacturing industry, optimize the necessary approval process, and create more convenient conditions for private capital to enter the manufacturing industry. The fourth is to speed up the clean-up and revision of laws and regulations, departmental regulations and policy documents that restrict private capital investment, strengthen the protection of private property rights, and create a legal and policy environment conducive to private capital entering the manufacturing industry.

The first is to improve the market competition mechanism. Accelerate the establishment of a factor price formation mechanism that reflects the scarcity of resources; improve the market-oriented resource allocation mechanism; improve the non-public economic market access mechanism, with a focus on establishing a fair market access system and creating an environment for fair competition in the non-public economy. Second, to promote backward production capacity to exit the market in an orderly manner by closing behind small enterprises, eliminating backward production capacity, promoting mergers and acquisitions, encouraging enterprises to invest overseas, and guiding enterprises to transform and transform production. The third is to establish a policy system for resolving excess capacity based on industry access, financial regulation, fiscal and taxation support, differentiated prices, and land management, and strictly enforce environmental protection and energy enforcement supervision. The fourth is to establish a monitoring and early warning mechanism for overcapacity in key industries. In particular, it is necessary to establish a monitoring and early warning system for overcapacity in strategic emerging industries, provide timely warning of overcapacity in emerging industries, and strengthen macroeconomic regulation and control, restricting localization in emerging industries. Investment behavior.

(V) Further improve and optimize the living environment of SMEs

First, implement the implementation of various national policies and policies to promote the development of small and medium-sized enterprises, and reduce the burden of taxation and fees for small and medium-sized enterprises. The second is to improve the financing environment for SMEs and reduce the financing costs of enterprises. Exploring the interest subsidy and risk compensation system for SME loans, formulating interest subsidies for SME loans according to industrial policies and plans, and providing appropriate risk compensation for SME loans. The third is to strengthen policy support and guidance for the transformation and upgrading of SMEs. The fourth is to increase the training of industrial workers and entrepreneurs, and cooperate with industry associations and other relevant third-party institutions and universities to conduct joint training for industrial workers and entrepreneurs, improve the overall quality of industrial workers and cultivate innovative entrepreneurial entrepreneurs.

Free Running Insert is a spring-like internal and external thread concentric body precisely machined with high-strength, high-precision, smooth-surfaced cold-rolled diamond-shaped stainless steel wire. It is mainly used to strengthen and protect the internal thread of low-strength materials. The principle is to form an elastic connection between the screw and the thread in the base body, eliminating the thread manufacturing error and improving the joint strength. The wire screw insert is embedded in the threaded hole of low-strength engineering materials such as aluminum, magnesium alloy, cast iron, glass steel, plastic, etc. It can form high-precision internal thread conforming to international standards, with high joint strength, shock resistance, impact resistance and wear resistance. Function, and can disperse the stress to protect the base thread, greatly extending the service life of the base. 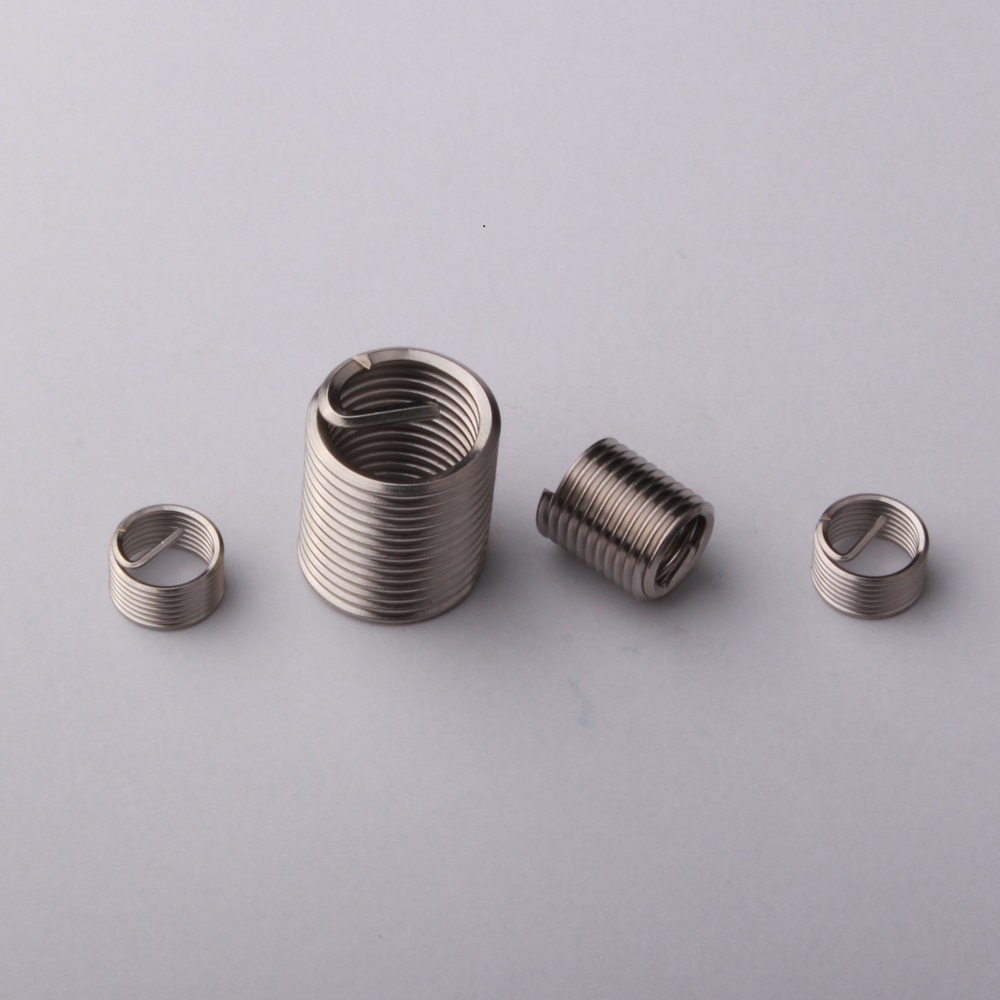 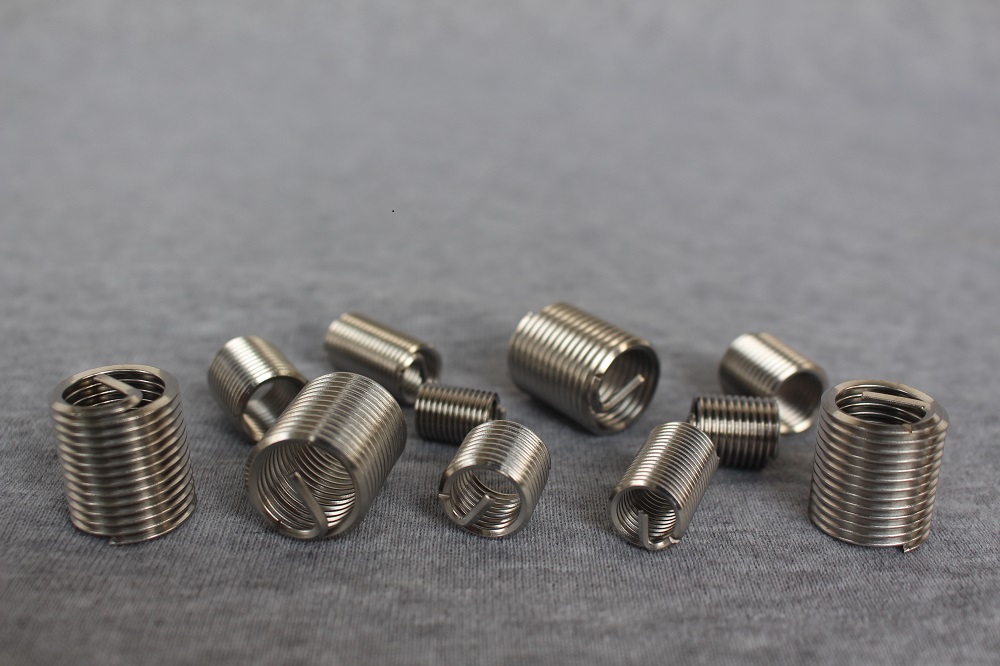